From Minecraft Wiki
(Redirected from Lighting)
Jump to: navigation, search
Not to be confused with Lightning.

In Java Edition, when calculating lighting, the shapes of some blocks are detected, including and only including piston, daylight detector, enchanting table, farmland, lectern, stonecutter, grass path, snow, end portal frame, slab and stair, so that the light passing through them can only spread in specific directions. For example, the grass path prevents the light from propagating downward, but the light can propagate in other directions.

Sky light of level 15 spreading down through a transparent block, the level remains unchanged. When it spreads horizontally or upward, it reduces 1 light level. However, when it spreads through a light-filtering block, it does not follow the above two rules and attenuates specific light levels.

In Java Edition, all of the following light-filtering blocks decrease sky light by 1 level (but do not affect block light). 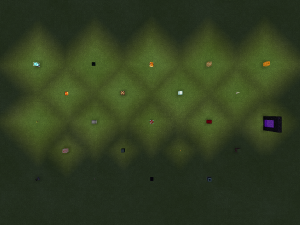 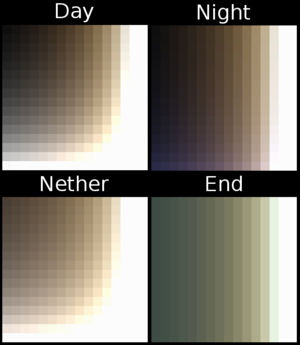 Smooth lighting is a lighting engine that blends light levels across block faces and darkens corners using ambient occlusion to add semi-realistic shadows and glowing from light sources. It affects only rendered brightness, not the light level, so it has no effect on mob spawning or crop growth. It is set on by default. Paintings and water are unaffected.‌[Java Edition only][1]

In Bedrock Edition, smooth lighting can be turned on or off in the Video settings, accessed from the Settings menu. In Java Edition, it has three settings: Maximum, Minimum (an older version of the engine), or Off, and can be changed by accessing Video Options from the Options menu.