From Minecraft Wiki
Jump to: navigation, search
Not to be confused with Lightning.
For block in Bedrock Edition, see Light Block.

A torch pattern which prevents most overworld hostile and
neutral mobs from spawning. See § Mobs

In Java Edition, when calculating lighting, the shapes of some blocks are detected, including and only including piston, daylight detector, enchanting table, farmland, lectern, stonecutter, grass path, snow, end portal frame, slab and stair, so that the light passing through them can only spread in specific directions. For example, the grass path prevents the light from propagating downward, but the light can propagate in other directions. Exceptions to this are composters, cauldrons, hoppers and carpets.[1]

When sky light of a level of 15 spreads down through a transparent block, the level remains unchanged. When it spreads horizontally or upward, it reduces 1 light level. However, when it spreads through a light-filtering block, it does not follow the above two rules and attenuates specific light levels.

In Java Edition, all of the following light-filtering blocks decrease sky light by 1 level (but do not affect block light). 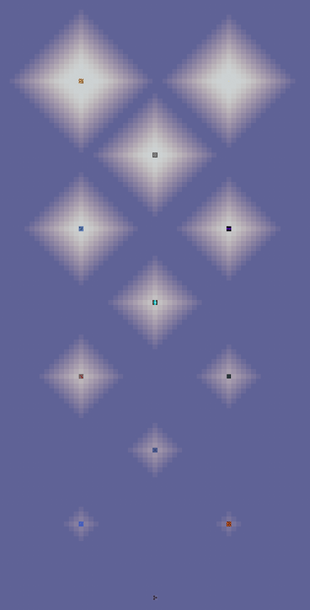 Mobs may ignore the light level they are supposed to spawn in after using /fill.[2] 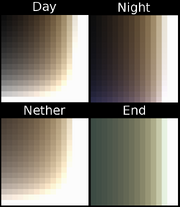 Smooth lighting is a lighting engine that blends light levels across block faces and darkens corners using ambient occlusion to add semi-realistic shadows and glowing from light sources. It affects only rendered brightness, not the light level, so it has no effect on mob spawning or crop growth, and in fact can be detrimental for this very reason. It is set on by default. Paintings and water are unaffected.‌[Java Edition only][3]

In Bedrock Edition, smooth lighting can be turned on or off in the Video settings, accessed from the Settings menu. In Java Edition, it has three settings: Maximum, Minimum (an older version of the engine)[4], or Off, and can be changed by accessing Video Options from the Options menu.

Ambient occlusion is responsible for adding shading to an ordinary texture. It is a layer of translucent textures, on top of the normal textures. Overlaying these AO textures onto a texture is called AO mapping. There are about five AO texture patterns used in Minecraft's Smooth lighting, excluding flips and rotations, and only three patterns algorithmically. Strictly speaking, it's probably more than that. That's when the intensity changes with the brightness level. But they are solved by Tint.

If AO mapping is selected only to the northwest of the voxel, the following pattern is possible.

These classifications allow we can deduce a pattern from the placement of each voxel. We then use the following function to compute the opacity of the voxels' vertices, depending on the presence of the side and corner voxels.

This generates a 2x2 pixel image using the values of each vertex. The pixels are small, but don't worry. It's zoom in using anti-aliasing, it will gradat.