From Minecraft Wiki
Jump to: navigation, search
"Raine" redirects here. It is not to be confused with Rain.
Lena Raine 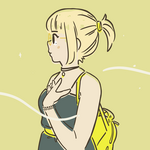 Lena Raine (/ˈleɪ.nə/ LAY-nah or /ˈlɛ.nə/ LEN-ah)[1], also known as Lena Chappelle or kuraine, is a music producer who composed the tracks for the Nether Update.[2][3] All of these songs are featured in her album Minecraft: Nether Update (Original Game Soundtrack).

Lena Raine was exposed to music at a young age through her participation in a youth choir and her father, who was a violinist.[4] She was introduced to MIDI arrangement through a Sonic fan community, where she began recreating songs she already knew and then eventually creating original music.[5] She attended Cornish College of the Arts and got a degree in music composition.[6] Raine is well known for her work on the soundtracks of Celeste and Guild Wars 2. In 2019, she was nominated for a British Academy of Film and Television Arts award and won American Society of Composers, Authors and Publishers Video Game Score of the Year.[7][8]