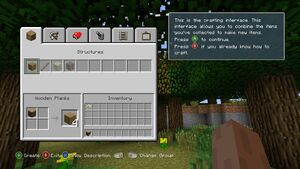 In-game screenshot of the tutorial. 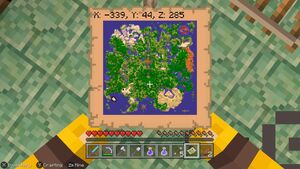 The Legacy Console Edition Tutorial is a world that introduces the player to the basic mechanics of Minecraft. It allows newcomers to familiarize themselves with the game, primarily with the controls and the crafting system. Available only in the Legacy Console Edition, the world and presentation differ depending on the version of the game it was created in, however the basic tutorial mechanics remain the same. All versions begin the player in a small enclosed are where building, crafting, mining, and survival mechanics are introduced. All versions of the tutorial world contain 12 hidden chests with a music disc that the player can search for.

The tutorial walks the player through:

Other tutorials for features such as beds, Nether portals, trading, boats, pistons, and fishing rods are scattered throughout the world, but are not part of the main tutorial.

This section needs to be updated.
Please update this section to reflect recent updates or newly available information.

The Minecraft logo as it used to appear in the tutorial. (TU7-TU11)

Issues relating to "Legacy Console Edition tutorial" are maintained on the bug tracker. Report issues there.