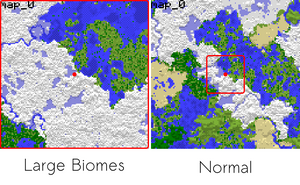 Comparison between large and normal. The red dot is the origin of the world. Both worlds have the same seed. The red squares present the same geography, clearly scaled up in the large biomes world.

Large Biomes is a world type that generates Overworld worlds at a higher scale than in normal worlds. It is intentionally programmed to not affect Nether biomes at all.[1]

Large Biome worlds are generated as Default worlds, but have 16 times as much area (multiplied by 4 along the X and Z axis), causing the biomes of the Overworld to be expansive. A Default and Large Biome world sharing the same seed are geographically the same, overall. Rivers are not larger than they are in a default world.

The player can use a map to gain a visual representation of the scale of the biomes in their world.

Issues relating to "Large Biomes" are maintained on the bug tracker. Report issues there.