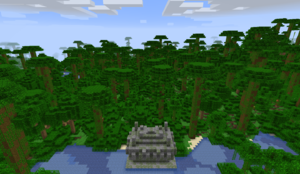 The jungle is a lush, temperated biome full of dense vegetation. Jungles are somewhat rare biomes, usually are expansive in size, and usually generate in green biome clusters. Jungles usually spawn near Mega Taiga biomes, it can also generate next to deserts and savannas but less commonly. It has a total of seven variants. The sky color is lighter than in other temperated biomes.

In jungles, only cod and salmon may be caught during fishing in Bedrock Edition. Otherwise, bamboo and cocoa beans can also be collected as junk.

The extremely rare Modified Jungle Edge variant generates only in strict conditions, and is currently the rarest biome in the game, covering only a few millionths of the Overworld by area (the very rare Mushroom Fields biome covers about a thousandth, for comparison). In order for modified jungle edges to generate, a Swamp Hills biome must generate right outside the edge of the jungle.[3] This results in a double-layered transition, with a thin normal Jungle Edge bordering the swamp hills, and the modified jungle edge bordering the jungle. As both jungles and swamp hills are already rare, and even more rarely do they generate bordering each other, the conditions for a modified jungle edge to generate are extremely rarely met. When they actually do manage to generate, they are often just a few hundred blocks in length, but in some cases are less than 10 blocks, making them one of the smallest biomes as well. Modified jungle edges feature the same smooth transition and lowered tree density that regular jungle edges have, though with more mountainous terrain and occasional overhangs. Ocelots, parrots, and pandas may spawn in this biome, but jungle temples do not generate here.

The Bamboo Jungle variant generates in large patches within regular jungles. Trees are much less dense in this variant than in the main jungle, comparable to the Jungle Edge, but boasts countless amounts of bamboo across its landscape. Some swaths of grass blocks are replaced with podzol, similarly to giant tree taigas. Additionally, all naturally-generated trees are large variants; only 2×2 jungle trees and large, branching oak trees may generate, though many of the oaks are simply small "balloon" oaks. Trees planted and grown by the player can be any size. All jungle-exclusive mobs, including pandas, may spawn here. Pandas have a higher spawn rate in bamboo jungle than in regular jungle. Jungle pyramids may spawn here in Java Edition, whereas in Bedrock Edition, there are no jungle pyramids.