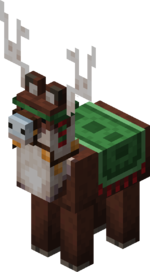 Jolly llamas look for Fern and Large Fern and eat them. After eating them, they start prancing around and make a jingling noise when they hop.