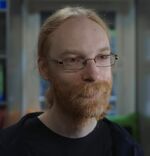 Jens "Jeb" Bergensten is a Mojang Studios employee currently working as the lead creative designer of Java and Bedrock editions, and Minecraft Dungeons.

Jeb used the Minecraft Wiki as Jeb mojang,[8][note 1] where he was particularly active in the issue lists, which he sanctioned as the official place to report and discuss Minecraft bugs and annoyances before the introduction of the official bug tracker.

Jeb joined Mojang in November 2010 as a game developer.[5] Starting out as a back-end developer for Scrolls, Jeb became increasingly involved in the development of Minecraft, implementing features like wolves, pistons, and map structures (villages, strongholds and nether fortresses).

Jeb later took the lead position in Minecraft development in December 2011 when Markus Persson stepped down.[12][13] On December 12, 2012, he announced that he would also take the lead of Pocket Edition.[14]