From Minecraft Wiki
< Java Edition version history
Jump to: navigation, search
"Snapshot" redirects here. It is not to be confused with Screenshot. 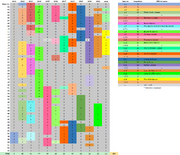 There are several development builds of Classic versions of the game which were never released to the public. Some of them are now available through the launcher. In-game, the versions were labeled as their public release counterparts (e.g. 0.0.14a), but had distinct differences from the versions released to the public. Classic 0.24 is the only exception to this rule, as it was labeled simply "0.24" in-game, whereas the full release was labeled "0.24_SURVIVAL_TEST"