From Minecraft Wiki
Jump to: navigation, search
This article is about features that are in Java Edition, but unused. For unused ideas, see Java Edition mentioned features.

Since the beginning of Minecraft's development, there have been a number of features added to the game that have no actual use in Survival or in Creative. Some of these features are leftover from removed features, or simply placeholders for new features.

Certain blocks have certain combinations of block states that cannot be encountered in usual Survival gameplay, and instead require using commands, the debug stick or a debug world. As these are impossible to encounter, mapmakers may be able to use some of them as blank slates and remodel these using model files for custom blocks as these will not be able to be encountered in any gameplay. Note, however, that these states are generally fragile.

Giants are an unused mob added in Indev. They appear to be a giant zombie. Giants have no movement AI, therefore they are unable to walk around. They cannot spawn naturally because the game requires the light level to be both greater than 11 and less than 8 and those conditions cannot be met in vanilla. This makes them impossible to appear through spawners.

Giants can be summoned only by using the /summon giant command.

During the 2020 April Fools' snapshot, the giant is able to naturally spawn on occasion in custom dimensions.

The killer bunny is a variant of the rabbit that is hostile to all players and tamed wolves. Its fur is pure white with blood-red eyes that are horizontal, compared to a normal rabbit's vertical eyes.

If the killer bunny finds any player within a 16-block radius, it hops quickly toward the player, much faster than a normal rabbit. It moves in a style similar to that of a spider. Once it closes in, it lunges at the player, dealing a fair amount of damage. If the player strikes at the killer bunny, it runs away for a brief moment, then returns to lunging at the player. Killer rabbits are also immune to the Thorns enchantment.

If it cannot find a player, the killer bunny actively seeks out and attacks any wolves as well, including tamed wolves. These wolves, in turn, attack the killer bunny, leading to a vicious fight.

On peaceful difficulty, the killer bunny does not despawn, despite its hostile nature. It still attacks wolves and tamed wolves.

The killer bunny can be spawned only with the /summon rabbit ~ ~ ~ {RabbitType:99} command.

Zombie horses are a variant of horses that were added in Java Edition 1.6.1, along with normal and skeleton horses. There is a zombie horse spawn egg available only in creative mode, but they remain unused in survival.

In addition to spawn eggs, zombie horses can be spawned with the /summon zombie_horse command.

The illusioner is an unused illager that was added in Java Edition 1.12. Like other illagers, they attack players, villagers, wandering traders and iron golems within a 12 blocks range. It attacks with its spells, and with its bow.

The illusioner has a face that is just like the face of a evoker, formerly of a vindicator.

Illusioners can be spawned only with the /summon illusioner command.

Minecart with spawner is a combination of a minecart and a spawner.

Minecarts with spawners cannot be obtained as an item in the inventory, and can only be placed using the /summon command.

The spawner inside the minecart acts the same way as normal spawners, and the mob being spawned can be changed with /data modify.

The uncraftable potion is a potion added in the Java Edition 1.9 snapshot 15w44b with no effect that is unobtainable in survival without cheats as of 1.16. It is also available in splash potion and lingering potion forms, as well as for tipped arrows. It serves as a placeholder for potions that have missing or invalid potion-effect tags, which default to this.

It can be obtained using the following command: /give @p minecraft:potion 1 0 {Potion:"minecraft:empty"}.

There are also potions that cannot be brewed, and give the player status effects not intended to be received by potions; e.g. Wither, Nausea. Again, these can be obtained only through custom potions.

Various status effects remain unused in the game. They can be obtained using /effect or potion NBT data, but have no way of being obtained other than that.

From snapshot 19w13a to 1.14 Pre-Release 1, the arrows of luck could be obtained from fletcher villagers when the player has the Hero of the Village status effect.

Bad Luck is the opposite of Luck; it reduces the chances of high-quality loot. Bad Luck cannot be obtained from potions, even in creative mode.

During the Java Edition 1.6.1 snapshots, the health boost status effect was added. It boosted the player's hearts for a temporary time. It could be obtained from eating a golden apple.

In the next main snapshot, golden apples give the player absorption instead of a health boost, but the effect was still left in the game.

The following biomes remain unused since 13w36a and 18w08b. While they do not naturally generate in default worlds, they can be accessed using the Buffet world type.

They were found in .minecraft/resources/sound/loops/, and could be converted to reveal four loops, of birds chirping, cave chimes, ocean and waterfall noises. They were removed in an unknown time.

Some of these sounds are still usable by running:

Curiously, the "affectionate scream" can be heard in the Nether Update Official Trailer at around 1:03. 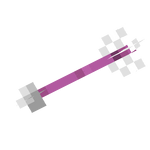 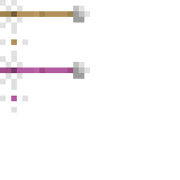 The arrow and the purple arrow beside each other, in that respective order.
See also: Arrow § History

The purple arrow shot by a skeleton in Survival Test.

Purple arrows were shot by skeletons in Survival Test and acted the same as regular arrows, but could not be picked up. The purple arrow used a texture on the same sheet as the normal arrows, but the texture is not currently in use.

In Java Edition 1.9, a new texture was added for arrows, causing the original arrow texture, including the purple arrows to be entirely unused.[8] 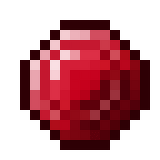 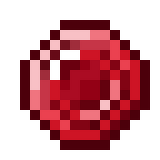 On May 21, 2012, Jeb released a screenshot of himself testing the trading system. At this time, what would become emerald ore in Java Edition 1.3.1 was ruby ore. The previous ruby texture remains in the ruby.png file. It is unknown if the texture will ever be used. Dinnerbone stated in a forum post[9] that they went with emeralds instead of rubies at the last minute because he is colorblind and he had a hard time spotting the difference between ruby ore and redstone ore.
The names "Ruby Ore" and "Ruby" were still in the .lang files, but they were removed.

Rubies would later appear as the purchasable currency in Minecraft Earth. However, they use a different texture and are completely unrelated to the original item.

The villager speech bubble is an image that was added along with the villager.png file in the jar when the trading system was added. It showed a trade, where raw chicken could be sold to villagers for another raw chicken. Both raw chickens have the old raw chicken texture. During an interview about villagers, Jeb offered a possible explanation: "We did some experiments with thought bubbles, but it didn't look good. So in the end, after I'd been lead on Minecraft for a year, we just decided to add an interface instead." [10]

The texture has been partially overwritten by the selection arrows. 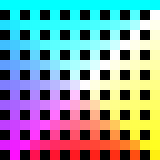 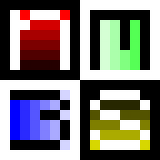 These textures were added in Java Edition 1.9 snapshot 15w31a. They are used by the developers, maybe for making block models. They could also be seen in certain Java Edition 1.13 snapshots.

Despite being unused, both of these blocks were given new textures for the 2018 April Fools' update: .

The texture from the minecart model is rarely visible. The texture appears to be dirt, which is an artifact of when the minecart used to act as a portable chest. The "dirt" level used to raise when items were put into it. The texture still appears inside minecarts, but it's blocked by a different texture. It can be seen only in spectator mode.

Evokers, vindicators and witches are hostile mobs based off the villagers, and they have an unused hood texture.

Prior to the 1.14 Village and Pillage update, the villagers also had unused hood textures.

Despite the particle itself being removed in the snapshot 17w47a, the texture for the 'footprint' particle still exists within the game's jar file.[8]

During the April Fools' 2020 snapshot, the texture of the footprint particle was added into the snapshot as an unusable item named minecraft:footprint in the dimension "missing".

banner_base and banner_overlay item textures exist but are unused, meaning it was once going to use an item model instead of the original entity model.

Old texture from 12w32a snapshot still exists in "textures/entity/zombie" directory but it's unused.[8]

Some extra icons for maps. The white and green arrows are the only ones used normally, though the colored arrows are used for multiplayer in Bedrock Edition.

Squares labeled "SEL" and "UN SEL" (likely "SELECTED" and "UNSELECTED") can be found in "textures\gui\container\creative_inventory\tabs.png". Purpose unknown, though they could possibly be used as a template for the selected tabs and unselected tabs with the rest of tabs.png.

Skeletons normally wield bows, but if one were to spawn in a skeleton with a sword, the skeleton can use it like a normal weapon. A similar case happens with wither skeletons, in which one spawned with a bow can use it as intended, except the arrow is always on fire, even without lava or enchantments.

When the opacity of all pixels is set to 100%, unused textures are visible. The texture features Alex with glasses. It also features what appears to be the texture of Steve's arms implying that the Steve skin was used as a template for the Alex skin.