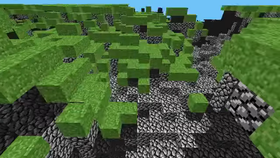 rd-132151 (officially known as Cave game tech test [2] or Cave Game tech demo[1]) was a pre-Classic version made on May 13, 2009. This version was never released. It is the first known version of Minecraft, or what was then known as Cave Game, to have been recorded, although there were some builds before this version.

Note: The original "Cave game tech test" video is region-locked in all countries.