This page describes content that exists only in outdated versions of Minecraft.
The Sky Dimension was revised to create The End. 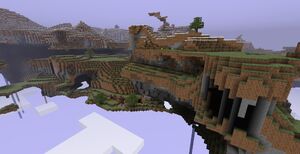 An early screenshot of the Sky Dimension.

The Sky Dimension, or simply the "Sky", was a planned dimension in Minecraft, intended to be the opposite of the Nether. Using the buffet world generation option, a player can generate a partial recreation of the original concept.

In Indev, there was a map type called "Floating". It generated floating islands full of terrain based on the World Theme.

In a live webcast on the Swedish gaming site feber.se Notch revealed that the Sky Dimension would "probably be a dream world" and that when "you go to bed there is a certain chance that you get dragged into the dream world instead. Then you will be able to do it on purpose later on."

The Sky Dimension was originally planned for the Adventure Update, but Notch put it on hold until the Nether was more fun.[2]

"It didn't work so well because of how light is calculated," Jeb explained. "The Sky Dimension originally had this top down light that the Overworld has, so you get like shadows in caves and such. But performance wise, it didn't work - it was extremely slow. So we removed the sun – now everything is evenly lit unless you've got a torch."[3]

And so the original concept of the Sky Dimension was later rebranded as "The End,"[4] a dark place fittingly referred to as the "end of the game," home to the endermen and the ender dragon, and a total conversion of the original idea.

Notch tweeted much later that a different "Skylands" dimension probably was still in the making. This version, completely separate from the End, was set to replace the original idea.[5] However, Jeb later stated that returning the Sky Dimension was not planned and therefore is unlikely to be done.[6][7]

In Java Edition 1.13 and later, it is possible to partially recreate the Sky Dimension through the Buffet world type. This is done by choosing the "Floating Islands" World Generation option and picking any Overworld biome (any type of Forest, Plains, Swamp, or Jungle) as the World Terrain option. This creates a partial recreation of what the Sky dimension might have looked like.

In this version of the Sky Dimension, the buildup of the world blocks-wise is very much like the Overworld, but it is always midday and it does not rain or snow (though cloud cover does appear as if it were raining). Although uncommon, it is possible to find sugar cane, redstone, lapis lazuli, and more rarely diamond. Like the normal world, you can also find dungeons, Iron, coal, and gold. The only mobs that spawn in the sky dimension are chickens; no other mobs (including hostile ones and squid) spawn. Below the islands of the Sky Dimension is nothing but the Void and a layer of clouds. 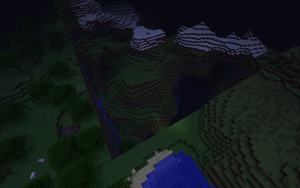 A world corruption on singleplayer.

Originally, the Sky Dimension was hidden within the region 0 (Overworld) code. However, starting in Beta 1.9 Pre-release 3, it was given its own region: Region 2, with Region 1 being the Nether. However, instead of Sky Dimension chunks spawning within its region, they would generate in the Overworld on Multiplayer servers. This is most likely due to an issue with map generation and saving causing Sky Dimension chunks to save over Overworld chunks rather than being made in their own, separate map files like the Nether does. If a world with Sky Dimension chunks is brought from multiplayer to singleplayer, the area of the chunks will always be Plains biome, even if snow generated naturally on the ground.

The first released screenshots of the Sky Dimension:[9]