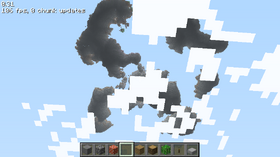 A version of Indev 0.31 was released on January 13, 2010;[1] its chronology is unknown compared to the survival version. It is believed this was a developer version that was accidentally made public.