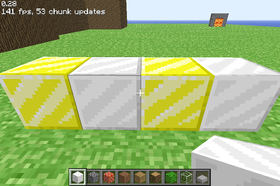 Note that the screenshot shows a texture pack enabled. This is the only known screenshot of 0.28 currently.

Different ideas were considered during the development of this version. Originally, 0.28 was meant to be a part of Survival Test.