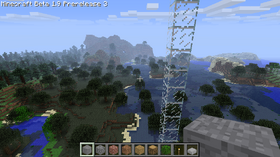 Beta 1.9 Prerelease 3[1] [2] [3] is the third pre-release for Java Edition 1.0.0, released on October 6, 2011, which adds five new blocks including the brewing stand and enchantment table, as well as the eye of ender, five baby animal variants, XP levels, the enchantment glint effect, and completed potion mechanics. Unlike the client, the server for this version was not reuploaded.

The original version of the Beta 1.9 Prerelease 3 was released shortly before 14:57 UTC on October 6, and featured a crash issue.[4] The first reupload of Beta 1.9 Prerelease 3 was released at around 14:58 UTC,[5] while the second reupload was released at around 15:08 UTC.[6] One of these reuploads was to remove some code relating to the ender dragon.[which?] This was possibly done to avoid leaking information, as the ender dragon had not yet been announced.

Due to a bug, multiplayer servers generate sky dimension chunks starting in this version. The biome of these chunks will be random if saved in multiplayer, however, if they are saved in singleplayer, they will change to plains biomes, no matter if snow had generated in the chunks. This was fixed by 1.0.0.