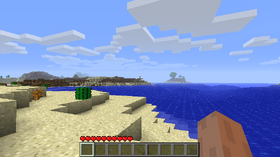 Beta 1.7[1] is a version of Java Edition Beta released on June 30, 2011, which adds pistons and shears among other changes.

An official video documenting some of Beta 1.7's major features was released on Mojang's official YouTube channel on May 24, 2011. The video was made by Hat Films. Made before Java Edition was officially released (and long before 1.7 came out), the trailer omits “Beta” when referring to the version number.