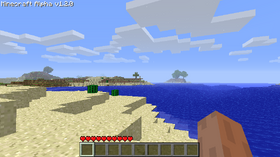 Alpha v1.2.0, also known as the Halloween Update, was released with server 0.2.2 on October 30, 2010, adding the Nether along with new Nether-exclusive mobs and blocks. It also added fishing, a new terrain generator, and other changes and fixes. This version is listed in the launcher, but attempting to play it downloads Alpha v1.2.0_02 instead.[2]