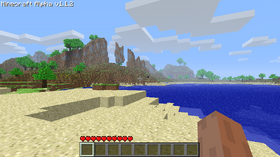 Alpha v1.1.2[1][2][3] is a version of Alpha released on September 18, 2010 to fix sound and graphical bugs. Shortly after this version's unannounced release,[note 1] Notch made temporary, load-reducing changes to his web server. Since one such change was disabling payments, he decided to declare Minecraft free-to-play for the weekend.[4][5][6]