It has been suggested that this page be moved to Java Edition Infdev 20100630-2.
If this move affects many pages or may potentially be controversial, do not move the page until a consensus is reached. [discuss]
Reason: There were two infdev versions and it's probably better to consider them both infdev versions (leaving a redirect for this one obviously)
When moving, be sure to use the appropriate tool instead of simply copying and pasting the page's contents, to preserve edit history.
Minecraft Infdev 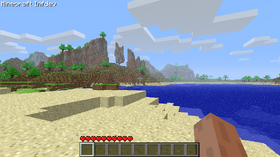 On June 29, 2010, about 19 hours before the official release, there was a downloadable version to test the offline client.[5]