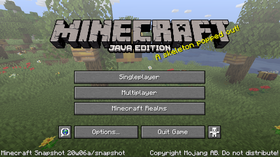 Snapshot 20w06a (known as 20w06a in the launcher) is the first snapshot for Java Edition 1.16, released on February 5, 2020,[1] the first of the year and decade. It adds several new Nether Update features.

68 issues fixed
From released versions before 1.16