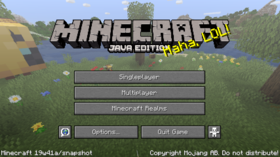 19w41a is the ninth snapshot for Java Edition 1.15, released on October 9, 2019.[1] It adds a new menu panorama, two new blocks, the ability to toggle sprinting and sneaking, and a new command for spectating.

39 issues fixed
From released versions before 1.15

From the 1.15 development versions