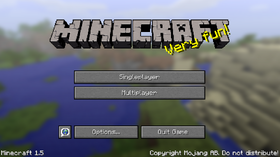 For a guide about all content in this release and the other releases of the Redstone Update, see Java Edition guides/Redstone Update.

1.5,[1] the first release of the Redstone Update, was a major update to Minecraft (Java Edition), released on March 13, 2013,[2][3] which added a number of new redstone-related blocks and a new decorative block – the block of quartz. Also included was a scoreboard system, a new texture pack format and a lighting engine optimization.

A pre-release version of 1.5 was released on March 7, 2013.[4] This pre-release was later reuploaded, and this reupload was used as the full release of 1.5.

77 issues fixed
From released versions before 1.3.1

29 issues fixed
From released versions before 1.3.1

From the 1.3.1 development versions