No dates have been given for the release of development versions of this update so far.

Please note that the names of many features are currently placeholders. 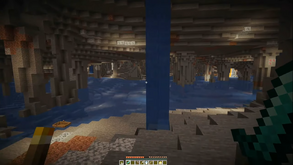 A picture of the local water levels in use forming an underground lake or ocean shown in Minecraft Live 2020.

The preview of updated mountain generation given during Minecraft Live 2020.

Screenshots of the Caves and Cliffs Update from Minecraft Live 2020 and other sources:

24 issues fixed
From released versions before 1.17