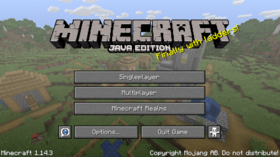 For the combat test with the same name as this version, see Java Edition 1.14.3 - Combat Test.

1.14.3 is a minor update to Java Edition released on June 24, 2019,[1] which makes small changes to villagers, adds a game rule to disable raids, changes some block placement rules, and fixes many bugs left over from 1.14.2. It is not compatible with 1.14.2 servers.

82 issues fixed
From released versions before 1.14