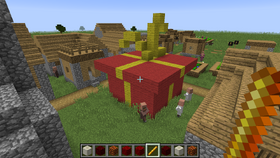 1.10-pre1 is the first pre-release for Java Edition 1.10, released on June 2, 2016,[1] which split /tp into a separate /teleport command, adds sounds for mobs added in previous snapshots, modifies villagers, and fixes bugs in the 1.10 snapshots.

Polar bears
Adult polar bears will jump in water if on fire.

35 issues fixed
From released versions before 1.10

From the 1.10 development versions