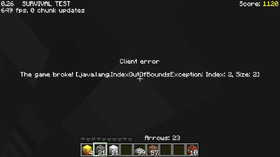 Spiders were almost certainly black when this version was released

There is a common misconception that spiders were brown in this version. However, thorough technical analysis of available evidence by Omniarchive on April 8, 2020, has revealed that they were almost certainly black.