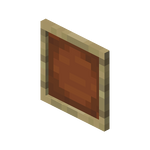 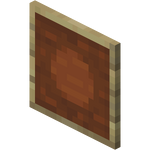 An item frame is an entity‌[JE only] or block entity‌[BE only] that displays the item or block that is inside it.

An empty item frame can be broken simply by punching it.‌[Java Edition only] If the item frame contains an item, punching it drops the item, leaving the frame on the wall.

Because item frames are entities in Java Edition, they can be broken in Adventure mode.‌[Java Edition only]

An item frame containing a pair of elytra generates in each end ship.

An item frame naturally generating in an end ship.

Expert-level cartographer villagers have a chance to sell an item frame for 7 emeralds. 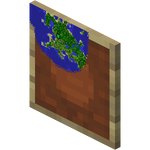 Item frames can be placed on the sides of cactus blocks, pressure plates, fences, trees, slabs, cobblestone walls, chests, doors, and all solid blocks. They can also be placed on the top and bottom of these blocks. As item frames are an entity, multiple item frames can occupy the same block, although on different faces. It also allows non-solid blocks to occupy the same space.‌[Java Edition only]

Players can place items in the frame by using the item. If a map is placed in an item frame, it enlarges to show the map in the size of a full block, with the item frame's location displayed as a green pointer on the map, pointing in the direction the item frame is facing. If this is done in the Nether, the green cursor spins around similar to the white cursor (players). If the item in the item frame has been renamed using an anvil, it displays its custom name when the cursor is over the item frame. If the player places a block inside the frame, it is displayed in miniature half in, half out of the block. This can be most notably seen on stairs or slabs.

Pick block may be used on item frames by players in creative mode only, the control has no effect for players in survival or adventure mode. When the item frame is displaying an item, pick block picks the displayed item instead of the item frame.

Item frames can be placed on the lid of a shulker box that is positioned horizontally, but pop off when the lid is opened.‌[Java Edition only] 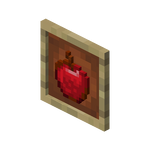 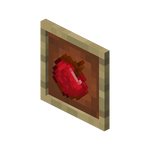 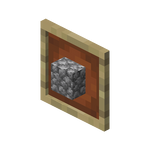 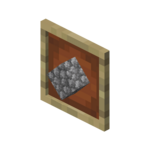 The displayed item can then be rotated by right-clicking the frame. Items displayed in the item frame can turn 45° diagonally, with a total of 8 possibilities (90° and 4 possibilities if it is a map), and the frame outputs a redstone signal depending on the rotation phase that can be interpreted by a redstone comparator (note that this rotation value is separate from the clock or compass rotation). As long as the frame remains placed, it remembers the orientation of the last item it held, and uses it for the next item it holds.‌[Java Edition only]

This page describes content that may be included in a future update.
This content has appeared in development versions, but the full update containing it has not been released yet.

This section contains content on features that are part of Experimental Gameplay in Bedrock Edition.
These features may be properly added in a future update, but require the "Caves and Cliffs" option toggled to be enabled in the current version.

An item glows when placed in a glow item frame, but it does not affect the light level, only appearing as if illuminated.‌[upcoming: JE 1.17 & BE 1.16.220]

Item frames have entity data that define various properties of the entity.

Issues relating to "Item Frame" are maintained on the bug tracker. Report issues there.