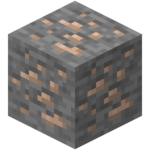 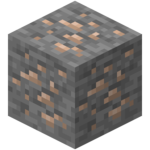 This article is about the ore. For the item, see Iron Ingot. For the mineral block, see Block of Iron. For the nugget, see Iron Nugget.

Iron ore is a mineral block found underground. It is smelted into iron ingots, which are used to make tools and armor.

Iron ore can generate in the Overworld in the form of mineral veins. Iron ore attempts to generate 20 times per chunk in veins of size 9, from altitudes 0 to 64, in all biomes.

Iron ore drops as an item if mined by a stone pickaxe or better. If mined by any other tool, it drops nothing.

Note: Information in this video about iron ingots, blocks, and tools may be outdated. However, the information regarding iron ore is still correct.

Issues relating to "Iron Ore" are maintained on the bug tracker. Report issues there.