From Minecraft Wiki
(Redirected from Iron nugget)
Jump to: navigation, search
This article is about the nugget. For the ore, see Iron Ore. For the item, see Iron Ingot. For the mineral block, see Block of Iron.
Iron Nugget 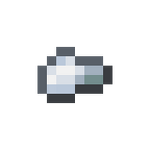 Iron nuggets are pieces of iron that can be obtained by smelting iron tools/weapons or iron/chainmail armor. One iron nugget is effectively worth one-ninth of an iron ingot.

Durability and enchantments do not affect the ability to smelt iron tools, weapons, or armor into iron nuggets.

Piglins may barter 9–36 iron nuggets when given a gold ingot.

Issues relating to "Iron Nugget" are maintained on the bug tracker. Report issues there.