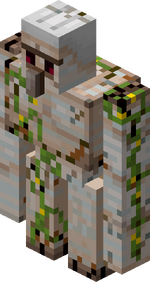 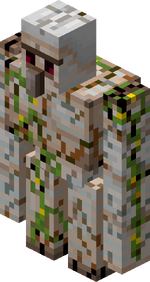 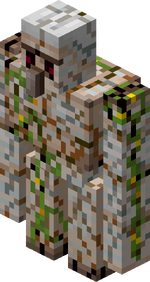 An iron golem is a large, strong, neutral utility mob that defends players and villagers.

In Java Edition, villagers can summon iron golems, either when they are gossiping or panicking. When a villager tries to summon a golem, up to 10 attempts are made to spawn a golem within a 16x13x16 box centered on the block the villager is standing on (block position +7/-8 blocks along x/z axes and +6/-6 blocks along y axis). A random y column is picked and then the topmost block and directly under the sky in that column is selected that is air, water, or lava, and has a "solid-blocking" block underneath, or block at y=+6 if none such is available in that column is selected. The target location is then checked whether the block underneath has a solid top surface (which is not the same as "solid-blocking"). The target block and 2 blocks above must not be a full block, be redstone-powered nor be rails, and the two blocks above must not be water. This means the iron golem can spawn inside 1-deep water or inside blocks like half-slabs, fences, and carpets (if other checks pass). Adjacent blocks are relevant, so golems do spawn partially inside adjacent solid blocks.[1] However, the spawning iron golem still must not collide with any existing entities.

In Bedrock Edition, an iron golem can spawn naturally when a village first generates in the world. Iron golems also spawn in villages having at least 20 beds and 10 villagers, in a 16×6×16 volume around the village center defined by a bed, a bell, or another meeting point. In order for a village to spawn iron golems, 75% of the villagers in the village must have worked in the past day, 100% of the villagers must be linked to a bed, and a player must be within 80 blocks of the village horizontally and within 44 blocks vertically. The chance of attempting a spawn is 1⁄700 per game tick, which averages to one spawn attempt every 35 seconds. Iron golems can spawn provided the 2 x 4 x 2 space above the spawn point (that is, horizontally centered on the NW corner of the block it spawns on) contains only non-solid blocks, and the block it spawns on is solid.

Iron golems are created by placing four iron blocks in a T shape (as shown in the image), and then placing a carved pumpkin, jack o'lantern or pumpkin‌[BE only] on top of the center upper block. The pumpkin may be placed by the player, a dispenser or an enderman, but it must be placed last. It needs space around it to be able to spawn and cannot spawn in a confined area. Alternatively, the blocks can be placed in any order with an uncarved pumpkin; the player can shear the pumpkin to spawn the golem. When successfully transformed, it is naturally passive toward the player who created it, attacking other players or mobs that try to attack the player who created it. It can also attack the player’s tamed wolves, if punched accidentally, but it never directly attacks the player. 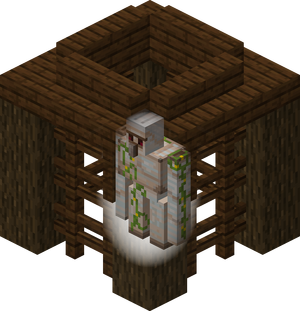 Iron golems can also be found surrounding pillager outposts, confined inside dark oak cages. When freed, they can help the player by attacking any nearby pillagers. 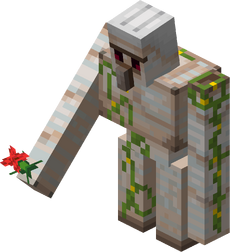 Like all utility mobs, iron golems can be leashed. Iron golems are faster in Bedrock Edition.

Iron golems are aggressive to most hostile or neutral mobs (list below) within 16 blocks of them, although they are not effective on flying mobs (ender dragon, wither, phantom, ghast) that don't venture into the iron golem's reach. If a player has -15 popularity or less, any village naturally-spawned iron golems become forever hostile to that player. Naturally, they retaliate when attacked by a mob. Iron golem built by a player never attacks them. Although they are guardians of villages, iron golems aren't actually provoked when a villager nearby is attacked.

When attacking, an iron golem moves quickly toward its target and swing its arms up violently to attack, dealing 7

The list below is complete. It contains players, and all undead mobs, neutral mobs, hostile mobs, and boss mobs. The remaining mobs (which are passive) are excluded. All passive mobs the iron golem attacks (which are unarmed pillagers, baby piglins, and in some cases, snow golems) are included in this list.

Zombies (and variants), zoglins, skeletons (and variants), spiders, cave spiders, slimes, magma cubes and illagers naturally attack iron golems on sight and may cause major damage, especially if the mobs attack in groups. If an iron golem is attacked by multiple mobs, it retaliates in the order it was attacked. In Bedrock Edition, silverfish and witches may naturally attack it too. If a player has -15 village popularity or less, any naturally spawned iron golems always attacks the player on sight.

However, in Bedrock Edition, knockback seems to have no effect on iron golems.

× 37, some cracks are visible. When their health is between 50

× 12.5, many cracks are visible.‌[Java Edition only] Iron golems do not crack in Bedrock Edition, even their health is 74 or below.

In Java Edition, using an iron ingot on an iron golem restores its health by 25%.[3] 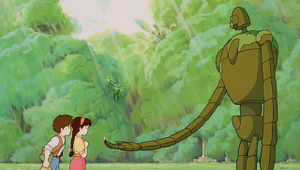