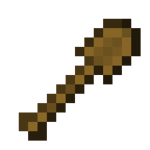 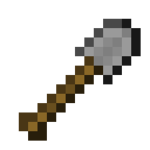 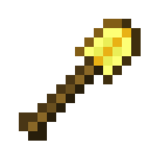 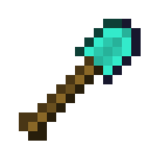 Shovels are tools used to ease the process of collecting dirt and other blocks.

A shovel can be repaired in an anvil by adding units of the tiers' repair material, with each repair material restoring 25% the shovel's maximum durability, rounded down.

Iron shovels can be found in 41.2% of village toolsmith chests in groups of 1.

Enchanted iron shovels[note 1] can be found in 13.3% of End city chests in groups of 1.

Enchanted diamond shovels[note 1] can be found in 13.3% of End city chests in groups of 1.

Vindicators and pillagers that spawn from raids have a 4.1% chance(5.12% on hard) to drop a badly-damaged iron shovel that is sometimes enchanted with a random enchantment.‌[Bedrock Edition only]

A shovel can be used to break some materials faster. When breaking a block, it uses 1 durability. For blocks that break instantly, it uses 0 durability.

Each different tier of shovel has a different durability:

The following table summarizes the speed at which different quality shovels perform on different block types. Values with a red background indicate that no resource is dropped when the block is destroyed without a shovel.

A shovel can be used to create a grass path by using (not digging) the shovel on a grass block. When creating a grass path, it uses 1 durability.

A shovel can be used to extinguish a campfire.

Hitting a mob while holding a shovel is a stronger attack than barehanded. Shovels take 2 damage when used as a weapon.

Shovels have an attack speed modifier of -3, meaning they take 1 second to recover. Shovels deal different damage based on the type:

In Bedrock Edition, shovels always attack instantly and do the following damage:

A shovel can receive the following enchantments:

In Bedrock Edition, wooden shovels are used as "paddles" when crafting the boat.

Wooden shovels can be used as a fuel in furnaces, smelting 1 item per shovel.

Issues relating to "Shovel" are maintained on the bug tracker. Report issues there.