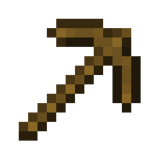 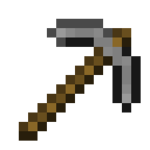 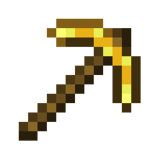 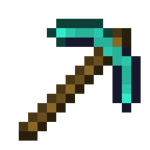 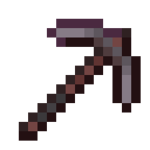 Pickaxes are one of the most commonly used tools in the game, being required to mine all ores, rock, rock-based blocks and metal-based blocks. They allow the player to mine blocks at faster speeds, and the speed increases depending on the material it is made out of.

Pickaxes are crafted using 2 sticks and 3 units of tool material.

A pickaxe can be repaired in an anvil by adding units of the tiers' repair material, with each repair material restoring 25% of the pickaxe's maximum durability, rounded down.

Wooden pickaxes can be found in 75.0% of bonus chests in groups of 1.

Stone pickaxes can be found in 25.0% of bonus chests in groups of 1.

Enchanted iron pickaxes[note 1] can be found in 13.3% of End city chests in groups of 1.

Enchanted diamond pickaxes[note 1] can be found in 13.3% of End city chests in groups of 1.

A pickaxe is used to break stone and metal-based materials faster. When a block is broken using a pickaxe, the pickaxe uses 1 durability. For blocks that break instantly, it uses 0 durabilities. Pickaxes have different amounts of uses based on the type:

Different qualities of pickaxe are required to successfully harvest certain ores and blocks. For example, while stone can be mined with any pickaxe, gold ore must be mined with an iron, diamond or netherite‌[upcoming: JE 1.16 & BE 1.16] pickaxe, or else the player harvests no ore. Different pickaxes also mine many materials at different speeds:

The following table shows the time it takes to break each type of block.

Hitting a mob with a pickaxe is a stronger attack than if barehanded. Pickaxes use 2 durabilities when used as a weapon.

In Bedrock Edition, pickaxes always attack instantly and do the following damage:

A pickaxe can receive the following enchantments:

Wooden pickaxes can be used as a fuel in furnaces, smelting 1 item per pickaxe.

Pickaxes use their ID to determine their grade.

Issues relating to "Pickaxe" are maintained on the bug tracker. Report issues there.