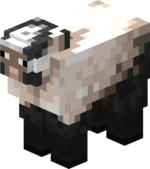 The Inky Sheep is a passive mob and a variant of the sheep found only in Minecraft Earth.

Inky sheep are an uncommon mob drop from sheep tappables.

Inky sheep are a beige-white variant of the sheep. The wool near their face consists of two black stripes running from the back toward the side of their face, separated by a white patch of wool. Their rear end and legs are completely black in color, hence the name. Unlike other sheep, their face is rather lightly brown in color.

Similar to ordinary sheep, inky sheep have the same AI behavior, wandering aimlessly, avoiding lava and cliffs that are enough to cause fall damage.