This feature is exclusive to Bedrock Edition.
tile.info_update.name 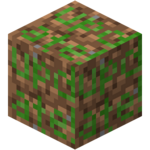 info_update is a debugging/placeholder block exclusive to Bedrock Edition that generates in place of blocks that were removed or not yet added.

The block cannot be obtained, without breaking it when already in a world. Its tool requirements are unknown.

Even in Creative, it cannot be obtained via /give or /setblock, and as such can only be obtained through inventory editors, or other methods such as using behavior packs to change loot tables.

Also, deleting an add-on will result in a block similar to the info_update block. It can be obtained by breaking the block, but appears in the inventory as "Unknown" and not as tile.info_update.name. and the player cannot break any block if he or she is holding it. therefore it is probably not the same block.

Also, if the resource pack is missing in the add-on, all blocks in the add-on use the texture of the info_update block.

The update game blocks are a set of two similar placeholder blocks present in Bedrock Edition. These blocks are placed in the world when the game detects an invalid block ID. (This means it is the substitute to the missing texture block that appears in Java Edition) Shovels are ineffective against this block despite the dirt sounds and texture.

They can be obtained only via inventory editing or mods. This block is used only for blocks with invalid IDs. If the block ID is valid, but has no texture, it appears as a magenta black checkerboard block instead of this block.

The block's texture is shared by reserved6.