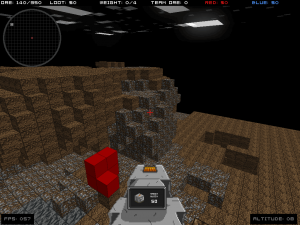 Screenshot of an Infiniminer map.

Infiniminer is an open source multi-player block-based sandbox building and digging game, in which the player is a miner searching for minerals by carving tunnels through procedurally generated voxel-based maps and building structures.[1]

Infiniminer is commonly associated with Minecraft for giving Notch an idea on where to go with Minecraft, sometimes as a forerunner. It was developed by Zachtronics Industries, and released in steps of incremental updates during April–May 2009. It quickly garnered a following on message boards around the internet, and inspired Notch to start working on Minecraft several weeks after it was discontinued. Like Minecraft, Infiniminer is a block-based digging/building game. It was originally intended to be played as a team-based competitive game, where the goal is to locate and excavate precious metals, and bring your findings to the surface to earn points for your team. However, as the game gained popularity, players decided it was much more fun to build things than to compete for points. Zachtronics discontinued development of the game less than a month after its first release after discovering a major source leak which allowed hackers to make unauthorized modifications to the game. Soon, there were communities with different versions of the game, and it was hard to maintain Infiniminer.