From Minecraft Wiki
Jump to: navigation, search
For the miniboss in Minecraft Dungeons, see MCD:Illusioner.

This feature is exclusive to Java Edition.
Illusioner 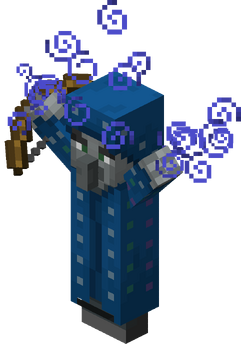 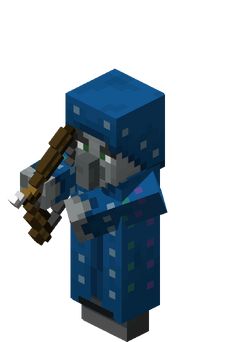 An Illusioner is an unused illager that casts spells and is armed with a bow. The spell is used on itself for defense or on a player while it is attacking.

Illusioners have no spawn egg in the creative inventory. They can be spawned only using the /summon illusioner command.

Unlike other illagers, illusioners do not spawn in woodland mansions, raids or pillager outposts. Similar to the unused giant mob, they do not naturally spawn in any biome.

An invisible illusioner captain and its 4 copies strafing. The real banner is invisible.

ominous banner, if it is a raid captain.

5 is dropped on player kills.

An illusioner's four false duplicates. The real illusioner is invisible.

Although they do not naturally spawn in raids, illusioners spawned by the player attack players, villagers, iron golems, and wandering traders within 16 blocks if a raid occurs. It attacks with its spells and its bow, firing an arrow every second, sooner than a skeleton.

It is the only illager that can see its target through walls.

The illusioner casts its blindness spell only if the regional difficulty is greater than 2.

Upon first engaging a new opponent, an illusioner casts a Blindness effect that lasts for 20 seconds. It signals this attack by raising its arms, making a low pitched sound, and producing a black mist ().

The illusioner does not cast this spell more than once on the same opponent, unless it has first shifted its attention to another opponent, and then back to that original opponent.

This spell resets the illusioner's spell cooldown to 1 second, and resets the cooldown for the blinding spell to 9 seconds.

As long as an illusioner is engaged in combat, it casts an Invisibility effect on itself that lasts 60 seconds and refreshes the effect whenever the Invisibility's time runs out. It signals this spell by raising its arms, making a strange high pitched sound, and producing a blue mist ().

When an illusioner becomes invisible – through this or another method – it creates 4 false duplicates of itself.

These hover and waver at short distances from the actually invisible illusioner, though they do not space themselves out until the first time the illusioner is attacked. They face in exactly the same direction as the illusioner, and move somewhat in step with the original, appearing to no-clip through blocks like a vex does. Despite using the shooting animation whenever the original uses its bow, only the real illusioner can shoot and be damaged.

Eventually, if the clones were not triggered and are still bunched together, they move to new positions. The Illusioner can also do this once in a while to "refresh" the clones' positions.

When catching fire, only the invisible illusioner burns.

The duplicates dissipate once the illusioner's Invisibility effect ends.

This spell resets the illusioner's spell cooldown to 1 second, and resets the cooldown for the invisibility spell to 17 seconds.

Illusioners have entity data associated with them that contain various properties.

Issues relating to "Illusioner" are maintained on the bug tracker. Report issues there.