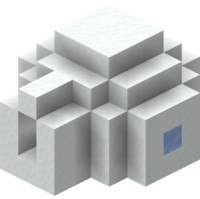 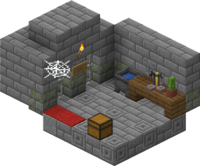 Igloos are structures that are naturally generated in snowy biomes. They are small round structures constructed primarily of snow blocks.

Igloos naturally generate in the snowy tundra and snowy taiga biomes, but not in snowy mountains, ice spikes, snowy taiga hills, or other variants.

In half of all igloos, an oak trapdoor can be found under the carpet (the third white carpet straight ahead from the doorway), leading down a long ladder shaft to a basement. This passageway and the basement are built from stone brick, some of which are infested blocks. In this basement there is a brewing stand, a cauldron, a chest, and beyond the far wall, behind iron bars in two different cages, are a plains‌[JE only]/snowy‌[BE only] villager and a plains zombie villager.[1] The zombie villager can be cured with a golden apple and a splash potion of weakness, both found inside the igloo. However, this may make the zombie villager lose its profession.

The cauldron is 2⁄3 full, and the brewing stand contains a splash potion of Weakness.

Igloos that generate without a basement have a snow block in place of the trapdoor. The villagers, brewing stand, and chest are absent in this case.

Professions of villagers and zombie villagers[edit]

In Java Edition, the generated villager is always unemployed,[2] even though there are some job site blocks like brewing stand or cauldron around. However, if the player breaks the iron bars in front of the villager, it finds one of the job site blocks and changes its profession to cleric or leatherworker. The generated zombie villager always has the profession of cleric.

In Bedrock Edition, the villager is with a random profession while the zombie villager is unemployed; although it can change its profession to cleric or leatherworker after being cured, due to the presence of the brewing stand and cauldron.

In Java Edition each igloo chest contains items drawn from 2 pools, with the following distribution:

In Bedrock Edition each igloo chest contains items drawn from 2 pools, with the following distribution:

Issues relating to "Igloo" are maintained on the bug tracker. Report issues there.