From Minecraft Wiki
(Redirected from Husks)
Jump to: navigation, search
For the mob in Minecraft Dungeons, see MCD:Husk.
Husk 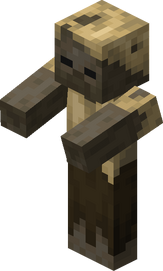 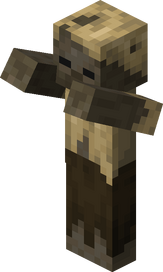 Husks are variants of zombies that spawn in deserts. Unlike zombies, husks do not burn in sunlight.

Husks spawn at a light level of 7 or less in the desert, desert hills, and desert lakes biomes, mostly replacing zombies in these biomes.

In Java Edition, husks spawn directly under the sky in groups of 4 in place of 80% of all zombies spawned in desert biomes variants.

In Bedrock Edition, husks spawn on the surface and underground in groups of 2-4 in place of 70% of all zombies spawned in desert biomes.

In Bedrock Edition, baby husks have a 15% chance to become a jockey when it tries attacking a villager, player, or golem. They can ride:

Notes about all jockeys:

A husk that drowns in water converts to a zombie.

Husks pursue the player, iron golems, villagers, baby turtles, and wandering traders on sight from 40 blocks away, as opposed to 16 blocks in most other hostile mobs. They attempt to avoid obstacles, including sheer cliffs, water, and lava, and try to find the shortest path to the player.

Husks apply Hunger to any player or mob they hit using a melee attack unless the husk is holding an item in its main hand or the player blocks the attack with a shield. This effect lasts for 7 × floor (regional difficulty) seconds.

Unlike zombies, husks do not burn in sunlight.

Husks can break down doors successfully on Hard difficulty.

Husks seek out any nearby turtle eggs and trample them.

Husks can pick up items if the game rule mobGriefing is set to true, and they do not despawn if left alone.

A husk that is submerged in water for 30 seconds converts to a normal zombie, which in turn may become a drowned by staying submerged for an additional 30 seconds.

When they die, husks drop 0–2 Rotten Flesh. The maximum drop is increased by 1 per level of Looting, for a maximum of 0-5 with Looting III.

Unlike regular zombies, a husk does not drop its head if killed by a charged creeper explosion.

If a husk wearing a pumpkin or jack o'lantern‌[Java Edition only] is killed using a weapon enchanted with Looting, there is a chance equivalent to the level of Looting used to drop the pumpkin or jack o' lantern, up to a maximum of a 3% chance of a drop.

Husks have entity data associated with them that contains various properties.

Issues relating to "Husk" are maintained on the bug tracker. Report issues there.