From Minecraft Wiki
Jump to: navigation, search
This article is about the gameplay mechanic. For the effect, see Hunger (status effect). 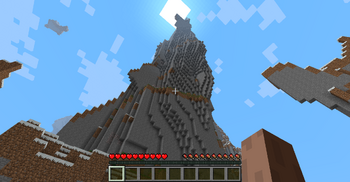 The hunger indicator is shown above the hotbar, to the other side of the health bar.

Various levels of player's hunger control health regeneration (or depletion) and the ability to sprint. When hunger is at a high enough value, the player's health regenerates. If it falls below a specific threshold, the player loses the ability to sprint. If the hunger bar is at zero, the player's health depletes. The specific effects are described in the Effects of hunger section. The hunger value does not drain on Peaceful difficulty and regenerates if it is not at the maximum value.

An important aspect of hunger not shown on the hunger bar is called food saturation and controls the decreasing of the hunger value. It depends on what the player has eaten last. There is also a food exhaustion value that controls the decreasing of the food saturation level. How exactly they control the overall hunger value is described in more depth in the Mechanics section.

Certain foods have a chance of inflicting Hunger effect on the player upon consumption, causing the player's food bar to deplete faster and turn a yellow-green color (

). These foods are pufferfish (along with nausea and posion), raw chicken (chance), and rotten flesh (dropped upon a dying zombie). A husk can also give you hunger upon being attacked by one.

), and the golden carrot's saturation potential is fully used. However, if the hunger level is lower than 9 (