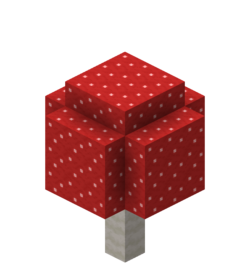 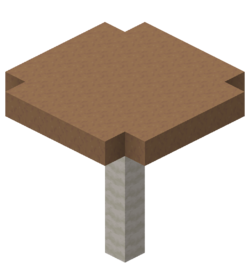 This article is about the large natural mushroom structures. For Nether equivalent, see Huge fungus. For the block, see Mushroom Block. For other uses, see Mushroom (disambiguation).

Huge mushrooms are tree-like structures that consist of mushroom blocks. They can be found naturally in swamp‌[Bedrock Edition only], dark forest, and mushroom fields biomes, or grown from a small mushroom.

Huge mushrooms can be grown by applying bone meal to a small red or brown mushroom that is planted on dirt, coarse dirt, grass block, podzol or mycelium. A 3 block radius around the mushroom must be free of solid blocks, and 7-9 blocks above the mushroom. Extra tall huge mushrooms (up to 13 blocks tall) have a ~5% chance of growing from mushrooms fed with bone meal.

A huge mushroom does not grow above the height limit.

A huge mushroom's height is normally between 5 and 7 blocks inclusive, but have a 1⁄12 chance to generate twice as high, meaning they can be up to 13 blocks tall.[1] 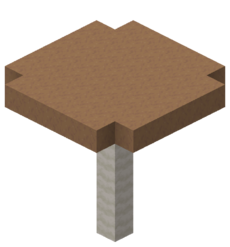 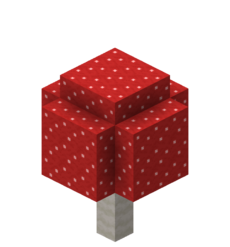 To grow, the lowest four blocks of the stem (i.e. the three blocks above the small mushroom being grown) must be air or leaves, and a 7×7×(height−3) region above that must similarly be clear of anything except air or leaves. The block under the huge mushroom's stem must be dirt, coarse dirt, grass block, podzol, or mycelium. Note also that the mushroom cannot be placed under direct sunlight; however, after placing it under a roof, the roof can be removed and the mushroom can still grow when bone meal is applied. Mushrooms planted on podzol or mycelium are exempt from the light requirement.

Huge brown mushrooms consist of a single stalk in the center, with a 7×7 canopy of brown mushroom blocks at the top with the corners missing.

Due to the space requirement matching the size of the canopy at the top, it is possible for a huge brown mushroom to grow with its canopy directly touching a mushroom next to it.

Huge red mushrooms, like their brown counterparts, have a single stalk in the center, but a different canopy, composed of five 3×3 slabs of red mushroom blocks arranged above and around the stalk, forming a 'dome'. Note that the space requirements do not require that the area occupied by lower part of the 'dome' is clear of other blocks. Partial blocks such as slabs are replaced, while full blocks remain unchanged.

Due to the shape of the dome, the shortest huge red mushrooms can grow such that their domes touch despite the dome being smaller than the full space requirement.