How to play is a guide designed to help new and old players to Minecraft. It has many different parts and sections to it.[more information needed]

Minecraft is a game about placing blocks to build anything you can imagine. At night monsters come out, so make sure to build a shelter before that happens.

Use the mouse to look around.

Use W A S D to move around.

Press W twice in rapid succession or press Ctrl to sprint. While you hold W, you continue to sprint until you have less than

Sprinting while in water makes you swim. Use the mouse to control the direction in which you are swimming.

to mine and chop using your hand or whatever you are holding. You may need to craft a tool to mine some blocks.

If you are holding an item in your hand, use

to use that item or press Q to drop it.

Sneaking is incredibly useful in Minecraft, it keeps you from falling off of a block and hides your nametag. To sneak, hold ⇧ Shift.

Before night fall, make sure you have obtained some wool by killing or shearing sheep, with three wool (of the same color) and three planks you can make a bed (Or you can steal a villager's bed). with a bed you can skip night because hostile mobs spawn in low light levels(Creepers, spiders, skeletons, zombies and endermen). In multiplayer mode, each player must have a bed and all players must sleep at the same time to prevent phantoms from spawning, which happens if any players fail to sleep for three nights in a row.

Place it in the world, then press

on the Crafting Table to use it.

The furnace is a workstation that can change specific items/blocks. Furnaces require an item to smelt and a fuel source. The fuel goes on the lower left section of the furnace interface and the item to smelt goes on the top left. The arrow that appears shows progress on the item being smelted/cooked and the fire icon shows how much more that fuel can be used (continuing to decrease without being in use). The most common fuel sources that are easily available are Coal and Charcoal with the best fuel source (individually) is a Lava Bucket. An ordinary bucket can be used as fuel, but only when a Sponge is in the input for being smelted.

An Anvil is used to enchant, combine or rename items. The first slot is the item that you want to repair or rename. The second is the sacrifice slot, which enchants or repairs the first. For example, if you want to enchant your sword, you need the sword (obviously), an enchanted book or sword of the same type, and Experience . Place the sword in the first slot and the enchanted book in the second. The Experience needed can vary. Before you collect the enchanted item, you have the choice to rename it. You can do this by left-clicking the slot on the top, and type in whatever you want. This method can also be used with Name Tag, although you cannot enchant or repair them.

The Enchanting Table is used to enchant items, although in a different method than the Anvil. This is how it works : You place the item you want to enchant in the first slot, and 1 Lapis Lazuli in the second. You are shown 3 choices. The first has the lowest price (average Experience : 7 and always 1 Lapis Lazuli) and is usually the worst; The second has a slightly higher price (2 Lapis Lazuli and average Experience of 11), and usually offers a medium enchantment. The third has a very steep price of 3 Lapis Lazuli and most of the time around 20 Experience, but I recommend getting it as it's usually a great enchantment (sometimes not). WARNING : You can't re-enchant an enchanted item on an Enchanting Table. Do this on an anvil. Tip : PC and desktop users can know the enchantment on each option just by hovering on it with the mouse. However, this option isn't available for tablet/phone users.

The Book & Quill lets you record your adventures. Tell your story by entering text into the pages. You can even change the title and the author! Sign the Book & Quill to finalize your work. The Book & Quill can be edited until it is signed.

A Nether Portal allows you to travel to a different dimension called the Nether. Nether Portals consist of obsidian (crying obsidian isn't compatable) in a 4 block by 5 block frame (as shown below).

If constructed correctly, the Nether portal can be lit via flame (from either burning blocks or flint and steel/fire charge) and activated. The inside of the frame should turn purple and you can now enter the Nether. 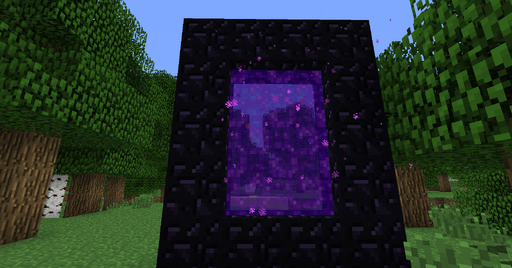 A Raid starts when you kill a pillager captain and go to a village. A Raid is super dangerous as Witch, Ravager, Pillager, Evoker, and Vindicator all spawn

Eyes of Ender are connected to the Stronghold and can lead you to the End. They are crafted with Blaze Powder and Enderpearls in a shapeless recipe

After throwing an Eye of Ender, it travels a short distance in the general direction of the nearest stronghold structure. When the Eye of Ender proceeds to travel downward, it means you are above the stronghold, you must dig down until Y = around about 30 or you might find a nataurally generated cave going in that direction (option 1 is more reliable). In the stronghold are many paths leading different directions; you seek a specific room that contains the End Portal. In the room is a Silverfish spawner and 12 End Portal Frames. Using an Eye of Ender on these frames fills them in. Once you've filled them all in (some should be filled by world generation), You should hear a loud noise and a new block appearing between the frames. Touching this block causes you to be transported to The End where you can now fight the Enderdragon, You also can't set your spawnpoint in the End (Beds and Respawn Anchors explode) so be sure to set your spawnpoint in the portal room.

To access online servers on Java, you need to go to multiplayer, then add server (or direct connect) and type the server ip address into ip section, after confirming you should be able to access that server. On Minecraft Bedrock, after pressing play a server tab should be available with a handful of servers being shown, pick one and you can join it.