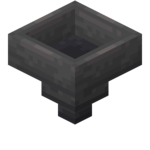 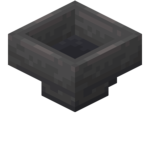 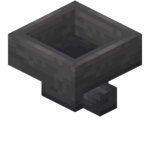 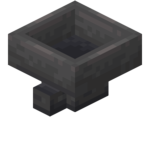 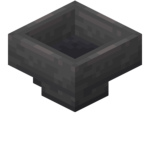 A hopper is a block that can be used to catch item entities, or to transfer items into and out of containers.

A hopper can also be obtained by destroying a minecart with hopper.

A hopper can be crafted from 5 iron ingots and a chest.

Hoppers can face down or sideways.
See also: Tutorials/Hopper

A hopper can be used as a container, as a crafting ingredient, and as a redstone component.

A hopper has an "output" tube at its bottom that can face down or sideways and provides a visual indication of which block the hopper is set up to drop its items into, if that block has an inventory. To place a hopper, use the Place Block control while aiming at the surface to which its output should face (Hoppers do not orient themselves automatically). To place a hopper directly on the face of an already interactable block, the player can sneak while placing the hopper. Attempting to place a hopper aimed on the bottom face of a block instead faces downward. A hopper does not change direction after placement, and it is not attached to the container it faces; the container can be removed or replaced, and the hopper remains unchanged.

Hoppers cannot be moved by pistons.‌[Java Edition only] Despite not appearing as a solid block, attached blocks such as rails, levers, tripwire and redstone dust can be placed on top of hoppers (but not on their side). 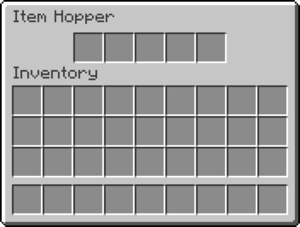 Hopper GUI showing the hopper's five slots of inventory at the top and the player's inventory below.

A hopper can be used as a container and has 5 slots of inventory space.

By default, the GUI of a hopper is labeled "Item Hopper". A hopper's GUI label can be changed by naming the hopper in an anvil before placing it, or, in Java Edition, by using the data command‌[Java Edition only] (for example, to label a hopper at (0,64,0) "Steve's Hopper", use /data merge block 0 64 0 {CustomName:'"Steve's Hopper"'}).

In Java Edition, a hopper can be "locked" (or subsequently unlocked) by setting the hopper's Lock tag with the data command. If a hopper's Lock tag is not blank, the hopper cannot be accessed except by players holding an item with the same name as the Lock tag's text. For example, to lock a hopper at (0,64,0) so that only players holding an item named "Steve's Key" can access the hopper, use /data merge block 0 64 0 {Lock:"Steve's Key"}.

A hopper can be used to craft a minecart with hopper]].

A hopper's behavior is the opposite of most redstone mechanisms as a redstone signal turns the hopper off rather than turning it on. Because of this reverse behavior, an activated hopper is actually turned off. To avoid confusion over the terms activated and deactivated, powered hoppers are often described as being locked and unpowered hoppers described as being unlocked.

An unlocked hopper has three functions:

A hopper with a container above it, such as a furnaces, chests, or another hopper, cannot collect dropped items; for run-time efficiency, the hopper's code doesn't check for floating items. Dropped items can still be collected from a hopper with a regular block above it, however. Items are gathered from the entire 1 block space block above the hopper, meaning that items sitting on partial blocks such as soul sand can be collected. It is also possible for a hopper to collect items from inside a full, solid block, a situation that might come from items rising up through solid blocks or being summoned. Item entities are not collected when they are outside of this 1 block area however; items on top of a stone block are not collected. Hoppers check for dropped items every game tick and they can collect items even before they are picked up by a player or destroyed by lava.

Hoppers have a "transfer cooldown" time. After pulling and/or pushing items, a hopper waits 4 redstone ticks (0.4 seconds, barring lag) before pulling or pushing again (a transfer rate of 2.5 items per second, barring lag). A hopper that has an item pushed into it from another hopper also starts a 4 tick cooldown period, regardless of whether it pushed or pulled items itself. Item entities can be collected at any time without affecting the transfer cooldown time, and they can collected entire grouped stacks of items rather than collecting singular items at a time. As a result, hoppers pull much more slowly than they collect. Pulling from a moving minecart with chest or minecart with hopper is even slower, since the minecart is not always above the hopper.

Chest A is full of items while the hopper and Chest B are empty.

Item pushes and pulls are processed in the same game tick, but pushes are processed before pulls. In the schematic, the empty hopper first pulls an item from chest A as it cannot push anything into chest B. After the cooldown, the hopper first pushes its item into chest B before pulling another item from chest A, both pushing and pulling in the same tick. This process repeats until chest B is full, at which point, assuming more items are placed in chest A, the hopper begin pulling exclusively as it cannot push an item into full chest B.

Some containers interact with hoppers in specific ways:

Furnace
Blast Furnace
Smoker
A working hopper pointing into top face of a furnace deposits only into the ingredient slot. It can push any item, including items that can't be smelted by the furnace. A hopper on the side face deposits into the fuel slot and it can push only items that are usable as fuel. A hopper below a furnace pulls only from the output slot, with the exception of pulling empty buckets from the fuel slot left over from using lava buckets as fuel. When a hopper removes items from a furnace, the experience points are 'stored' in the furnace until the player removes at least one smelted item.

Hopper
A sequence of three or more hoppers, each pushing items into the next, is called a hopper pipe. Working horizontal hopper pipes simply push items into each other at the expected rate of 2.5 items per second, but vertical hopper pipes are more complicated, as the hoppers are trying both to pull and to push. When a vertical pipe pulls from a single container, it simply transfers items at 2.5 items per second because the transfer rate is limited by the first hopper pulling items from the container. If a stack of items is in a vertical pipe, either from collecting a dropped item stack, being manually placed inside, or a hopper being fed from multiple sources, the items can be transferred twice as fast, because the hopper with the item stack is pushing items down while the hopper below it is also pulling items down.
A redstone comparator measuring the fullness of a hopper in a hopper pipe usually reads a continuous stream of items instead of blinking on and off as each item passes, but because pulls and pushes both occur in the same game tick, certain hoppers in a vertical hopper pipe may never power comparators even with a continuous stream of items: Their items get pulled out a single game tick after they're pushed in, which isn't measurable by a comparator—In Java Edition, comparators need measurements of at least 1.5 redstone ticks to produce a reading.

Lectern
Hoppers cannot remove or place books on lecterns. The redstone pulse emitted from a lectern when a page is turned can temporarily lock hoppers however.

A disabled hopper does not pull items from above (including item entities) or push them out, but may receive items from other droppers and hoppers, and may have its items removed by another hopper beneath it. To stop item transfer in a horizontal hopper pipe, only one hopper must be disabled, but to stop item transfer in a vertical hopper pipe, it is necessary to disable two hoppers in a row (because if a single hopper is disabled, the hopper above it can still push items into it and the hopper below it can still pull items from it).

In Bedrock Edition, a hopper uses its block data to specify its orientation and activation status.

A hopper has a block entity associated with it that holds additional data about the block.

Issues relating to "Hopper" are maintained on the bug tracker. Report issues there.