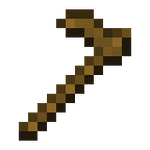 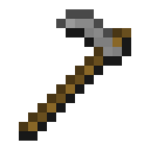 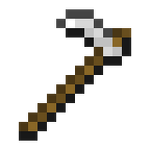 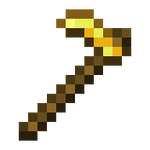 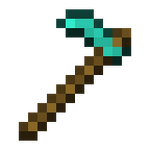 Hoes are tools used to till dirt and grass blocks into farmland, as well as quickly harvest certain blocks.

Like other diamond tools, a diamond hoe can be upgraded to a netherite hoe, although increased durability is the only benefit. The hoe's performance as a gardening tool or a weapon is unchanged by the upgrade.

A hoe can be repaired in an anvil by adding units of the tiers' repair material, with each repair material restoring 25% of the hoe's maximum durability, rounded down.

Hoes are used to turn dirt, grass blocks and grass paths into farmland. To till, press use on a grass or dirt block while holding a hoe. This does not work on mycelium or podzol,[1] nor does it work if there are other blocks on top of the targeted blocks, including snow layers.

Tilling is effectively instantaneous, regardless of material, and uses 1 durability. Breaking blocks with a hoe uses 0 or 1 durability, depending on the block.

Hoes also function as effective sickles or scythes, and can be used to harvest the following predominantly plant-based blocks more quickly. Breaking one of these blocks takes 1 durability.

Breaking any other block takes 0 durability if said block breaks instantly when broken by hand, or 1 otherwise.

damage in Java Edition in Bedrock Edition, Hoes can do as much as a pickaxe in terms of damage . Hoes use 1 durability when used as a weapon.

Piglins are attracted to golden hoes and run toward any golden hoes on the ground, and inspect it for 6 to 8 seconds before putting it in their inventory.