Hero of the Village 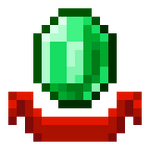 Hero of the Village is a status effect granted to the player upon defeating a raid.

Players receive gifts‌[JE only] and discounts from villager trades while under the effect. In Bedrock Edition, the effect is active only if the player is in the village in which the raid has been defeated. It does not affect the wandering trader's trades.

The Bedrock Edition animation for the Hero of the Village effect activating.

In Bedrock Edition, upon the effect being given a short animation of the effect icon appearing on the screen plays, similar to a Totem of Undying, Bad Omen, or Mining Fatigue.

Level I Hero of the Village decreases the cost of the first item in a trade by 30%; each additional level decreases the price by an additional 1⁄16 (6.25%). In Survival, the maximum level is V‌[JE only] or I‌[BE only], giving discounts of 55% and 30%, respectively. Nevertheless, one can use commands to give higher levels of the effect. Hero of the Village XII gives a discount of 98.75%, decreasing all prices to 1. No matter how large the discount is, the final item count in the trade is always at least one, never zero. In other cases, the decrement is the discount ratio multiplied by the original count rounded down or rounded up if the decrement is less than 1.

Example: Level III would give a 42.5% discount. For trade with 14 emeralds as the cost, the discount would be 5 emeralds (rounded down from 5.95 emeralds), for a final price of 9 emeralds.

Hero of the Village is a status effect and can be removed through all conventional methods, such as drinking milk, using Totem of Undying, or dying.‌‌[Java Edition only]

Upon obtaining the effect, villagers randomly throw items from a certain pool at the player as rewards, listed below. In order for a player to have gifts thrown to them, they must have Hero of the Village, the villager must be able to see them, and they must be within 5 blocks of the villager. After throwing a gift villagers will enter a cooldown lasting between 30 seconds and 5min 30 sec. Villagers will only give gifts while idle, working, or meeting at the town center (bell). They will not give gifts during the night when they should be sleeping.