In Bedrock Edition, the chance is increased by 2% per level of Looting, for a maximum of 8.5% with Looting III. 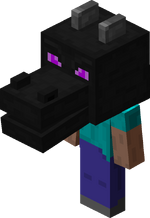 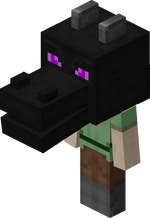 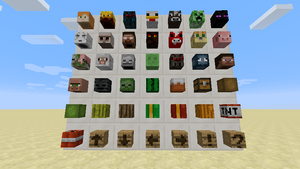 Most of the MHF mob heads provided by Mojang.

Mojang Studios created a number of accounts with specific skins, so that map makers could use common heads without the risk of someone changing their skins.[3] Nowadays, since heads don't update the skin if a player changes their skin, this is not something map-makers need to worry about, though these skins are still useful. These accounts have names in the format MHF_<Name>, for example MHF_PigZombie is the name of a Minecraft user with a zombie pigman head. MHF stands for "Marc's Head Format".[4] There are also a few blocks and "bonus" heads, for more variety.

The following names/heads have been made available:[5]

This section would benefit from the addition of more images.
Please remove this notice once you've added suitable images to the article.
The specific instructions are: Add all block revisions of every head