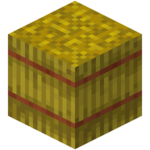 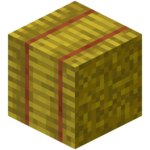 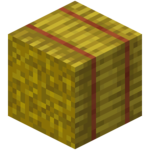 Hay bales can be mined using any tool or by hand.

Hay bales can be used to breed llamas and horses.

Falling onto a hay bale reduces the fall damage by 80%, meaning whatever falls on a hay bale takes 20% of the normal fall damage.

An unarmoured player with full health and no effects can fall as far as 100.27 blocks onto a hay bale, and still survive with 1

Placing a hay bale into a composter has an 85% chance of raising the compost level by 1. Composting with hay bale is very inefficient, as hay bale's chance to be composted is only slightly higher than wheat. For example, 900 wheats could be composted to yield 83.57 bone meals on average, but if crafted into 100 hay bales, they would only yield 12.14 bone meals on average. 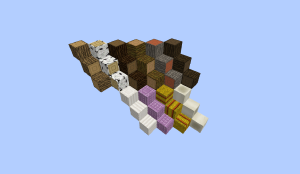 Hay bale can be placed under note blocks to produce banjo sounds.‌[JE & BE only]