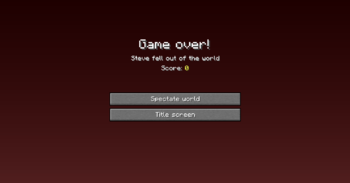 Hardcore is a Java Edition exclusive variant of Survival. In this mode, the world is locked to Hard difficulty and the player cannot respawn after being killed.

In addition, Hardcore mode worlds are restricted to hard difficulty.

It is normally impossible to toggle Hardcore mode once the world has been created, though it is possible to use external programs such as NBTExplorer to change it by setting the hardcore tag to either 1 (hardcore) or 0 (normal).

However, it is possible to enable cheats through the Open to LAN feature in the pause menu. From here, the player can, while spectating the world after death, type /gamemode survival to bring themselves back to Survival mode, being able to play again.

Hardcore mode is an option for multiplayer, and its functions are similar to those in singleplayer. All players have hardcore mode enabled — it is impossible to have some players in hardcore and some not.

Upon death, the player has the option to choose whether set to Spectator mode or go back to the main menu.

Server operators can use the /gamemode command to change the game mode of themselves or another player.

Note: After death, the player now has the option to either go into spectator mode or go back to the title screen.

The Hardcore mode button posted on Twitter by Notch.

Issues relating to "Hardcore" are maintained on the bug tracker. Report issues there.