From Minecraft Wiki
(Redirected from HUD)
Jump to: navigation, search 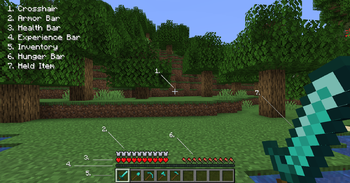 The hotbar in Java and Bedrock editions.

The hotbar in Bedrock Edition (mobile).

Players can dual wield allowing a second item to be shown on the left (or right if the player's main hand is set to "left"), along with an additional hotbar slot on the same side. Both the slot and the item are shown only if it contains an item, which can either be added using the GUI or by pressing "swap items". In Java Edition, it shows the off-hand slot with the items equipped on the left of the hotbar. In Bedrock Edition, this is not the case although the item is still equipped in the off-hand slot.

The crosshair is a small cross in the middle of the screen. It shows the aim point of the tool or item being held. The crosshair inverts the colors of the area it is upon, which can result in a nearly invisible crosshair if the area is a medium gray.

There is an option to hide the HUD. If the player is using keyboard controls, this can also be done with F1. In Bedrock Edition, the "Hide HUD" option toggles the hotbar, crosshair, and if using touch controls, buttons. The hand, paper doll, and coordinates are separate options.

Players can toggle the HUD, the vignette effect on fancy graphics, the pumpkin "view" and the block hitbox by pressing the F1 key. [more information needed]