Erik 'Grum' Broes is a game developer at Mojang AB. He was originally hired to develop the official modding API and maintain the Minecraft server. In August 2012, his duties were broadened, to include general game development.

Broes has been actively involved with the Minecraft community, and has joined with many prominent Minecraft figures, such as appearing in SethBling's channel on YouTube,[4] a popular and well-known channel regarding Minecraft.

Broes was also previously an admin on the Dutch TweakCraft server.[5][6] While not active in-game, he was mostly active on the server's IRC channel and mainly worked on the server's plugins and coding.[citation needed] 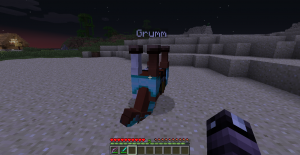 An example of an upside down mob by renaming its egg "Grumm." Note that this works with all mobs with spawn eggs.