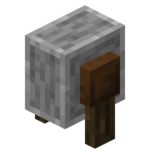 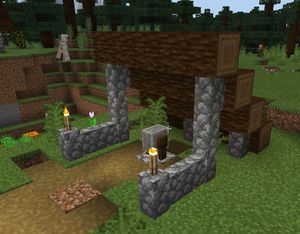 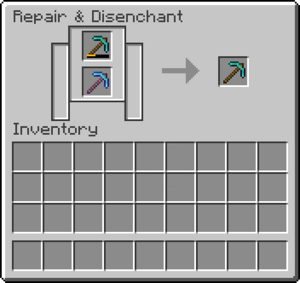 Placing two items of the same type in the input slots forms a new item of that type with a durability equal to the sum of the durabilities of the two input items plus 5% (rounded down), up to the maximum durability for that item type. Both input items are consumed in the process. If either input item is enchanted then this process removes the enchantments and returns an amount of experience based on the number and level of the enchantments. The experience returned for disenchanting makes the grindstone preferable for repairing over using a crafting table, but if the enchantments are desirable then an anvil can be used.

A single enchanted item (including enchanted books) can also be placed in either input slot, which removes its non-curse enchantments, returning an amount of experience for each, without repairing it or sacrificing another item.

If a village has a grindstone that has not been claimed by a villager, any villager who did not already pick a job site block has a chance to change their profession into weaponsmith.